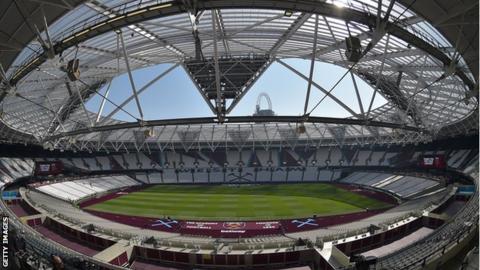 London Stadium will host a Women’s Super League match for the first time with West Ham Women moving their home game against Tottenham on 29 September to the 60,000-seat venue.
West Ham Women usually play at Rush Green, with a capacity of 2,000.
They are the latest WSL side to switch a fixture to a bigger venue following the Women’s World Cup, with Manchester City and Chelsea the first to do so.
Managing director Jack Sullivan said it is “another historic day” for the side.
The biggest crowd West Ham Women have played in front of was 43,264 at Wembley in their Women’s FA Cup final defeat by Manchester City in May.
“After the success of last season and walking out at Wembley, it will be a great opportunity to play on an iconic stage – our own home ground – for the first time ever, engaging with the West Ham fans who we urge to come and get behind the team,” said Sullivan.
“It promises to be a magnificent showcase for West Ham United and women’s football as a whole.”
Tottenham, in their first season in the top flight, have also committed to playing a game to Tottenham Hotspur Stadium – hosting the first North London derby there in November.
Relocating matches to bigger venues is nothing new in the women’s game in England, with Arsenal sealing their league title at Brighton’s Amex Stadium in April in front of a new WSL record crowd of 5,265.
BBC Sport has launched #ChangeTheGame this summer to showcase female athletes in a way they never have been before. Through more live women’s sport available to watch across the BBC this summer, complemented by our journalism, we are aiming to turn up the volume on women’s sport and alter perceptions. Find out more here.
Facebook
Twitter
Pinterest
WhatsApp
Previous articleLampard: Batshuayi is staying at Chelsea
Next article‘Don’t marry a woman who doesn’t like money, you will die poor’ – Lizzy Anjorin advises men