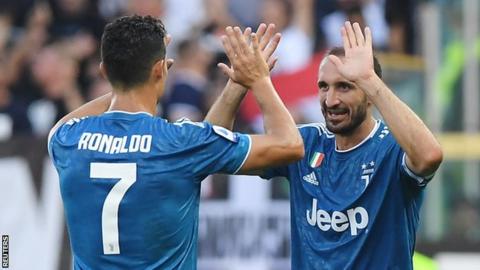 Chiellini’s goal was his first for Juventus since December

Cristiano Ronaldo had a goal ruled out for offside by the video assistant referee as Juventus started their season with a slender win over Parma.
Captain Giorgio Chiellini scored the Serie A champions’ goal, poking in from close range after Alex Sandro mis-hit a shot from a corner.
Ronaldo looked to have doubled his side’s lead but his head was judged to have been narrowly offside by VAR.
Juve’s £67.5m summer signing Matthijs de Ligt was an unused substitute.
Aaron Ramsey, who joined from Arsenal in the summer, did not make the matchday squad.
Manager Maurizio Sarri did not travel to Parma after receiving treatment for pneumonia, and the former Chelsea boss will also miss next week’s fixture against Napoli at Allianz Stadium.
Home TeamParmaAway TeamJuventus