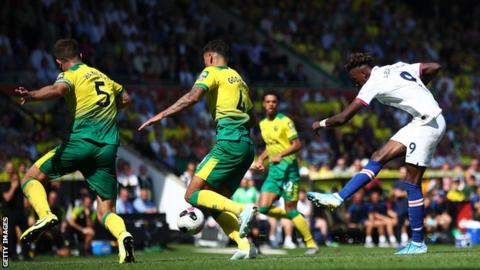 Tammy Abraham’s goals against Norwich will “do wonders for his confidence” and the striker will get “better and better”, says Chelsea manager Frank Lampard.
Abraham repaid Lampard’s faith in youth as his two goals – his first for the club – helped the Blues to their first win of the season at Carrow Road, with Mason Mount also on the scoresheet.
In a frantic first half, Norwich twice equalised through Todd Cantwell and Teemu Pukki, who scored his fifth goal of the season, but the Canaries struggled against a dominant Chelsea side after the break.
ADVERTISEMENT
Chelsea’s starting line-up had an average age of 24 years and 208 days – their youngest in the Premier League since February 1994.
“I spoke to Tammy before the game today and I said to him that I felt today was the day,” said Lampard.
“A bit of kidology really because who knows before the game, but I do trust in him and as a young striker you need that support. I did feel something for him today and it will do wonders for his confidence.”
Abraham was the target of racist abuse on social media after the Chelsea’s Super Cup defeat by Liverpool in Istanbul earlier this month.
“He has had a tough little period for the reasons we all know and strikers get judged purely on goals at times which is sometimes slightly unfair, but when you ask about character and enthusiasm to play for this club then he is right up there,” added Lampard.
“You see it every day and he can get better and better so I am really pleased for him.
“I supported Tammy over the online abuse. I did it out loud and I did it behind the scenes. I supported him on that as much as I can.
“In terms of playing, hopefully he will see my belief in him from the fact he is playing and hopefully from the fact I want to do extra shooting with him daily, every type of finishing and the first one today was top drawer. That comes from work on the training ground.”

Lampard made two changes to the side that drew with Leicester last weekend, bringing in Abraham and Mateo Kovacic for Giroud and the injured N’Golo Kante, but he was forced to make another change after Pedro picked up a hamstring problem in the warm-up, replacing him with Ross Barkley.
His trust in his younger players paid dividends inside the opening 20 minutes, with Abraham – who he said before kick-off would “cause Norwich problems” – finishing off Cesar Azpilicueta’s cross with a sweet finish into the bottom right-hand corner in the opening stages of the match.
Just 11 minutes after Cantwell’s equaliser for Norwich, Mount – who Lampard had on loan at Derby last season – cut inside the hosts’ defence and unleashed an unstoppable shot high into the net for his second goal of the season.
Despite Norwich’s second leveller, Chelsea continued to pressure their opponents’ shaky defence and Mount and Christian Pulisic both saw efforts go wide within moments of the second half getting under way.
Abraham’s second goal saw him become the youngest Chelsea player to score twice in a Premier League fixture since 1998, twisting and turning and tying Grant Hanley and Jamal Lewis in knots before firing an unstoppable drive past Tim Krul.
The Blues thought they had scored again when Kurt Zouma poked a loose ball home, but it was ruled out by the video assistant referee after substitute Olivier Giroud was judged to have fouled the Norwich keeper.
The only downside to Chelsea’s victory came late on as Mount hobbled off injured, with the win meaning they are unbeaten against Norwich in 16 meetings.

Premier League newcomers Norwich have quickly established themselves as a side not to be underestimated this season and they demonstrated that early on against Chelsea as Finnish striker Pukki – the Canaries’ hat-trick hero against Newcastle – put the ball on a plate for Cantwell to score his first goal in the top flight.
After Mount’s goal, Chelsea enjoyed a spell of sustained pressure and Norwich had Krul to thank for not slipping further behind, the keeper producing a sublime save to swipe an Andreas Christensen header over the bar.
The hosts were soon level though, Pukki effortlessly slotting home from a tight angle to become only the 10th player to have scored in his first three Premier League appearances.
Norwich struggled to match Chelsea’s tempo after the break and had to wait more than 20 minutes for their first attack of the second half, but were punished just 30 seconds later as Abraham bagged his second.
Ben Godfrey hit the bar with a header from a corner soon after but manager Daniel Farke ruled change was needed, making a triple substitution with 10 minutes to go as his side searched for a late equaliser.
It worked to some extent, Norwich pushing Chelsea harder in the later stages than they had throughout the half but ultimately struggling to find the end product.

Mount scored his second goal of the season and was a constant threat in and around the Norwich box, having five shots and making two key passes

‘I’m really pleased’ – what they said

Chelsea manager Frank Lampard, speaking to BBC Match of the Day: “It was a tough test and Norwich will get a lot of points here because they are a good side.
“The two goals we gave away I didn’t like but there were lots of good elements to our play and I’m really pleased.
“I’m particularly pleased for Tammy and he scored two good goals and the winning goal, but I want to talk about all the players today as we controlled the game on a hot day.
“Our performances haven’t given us what we deserved so far – but today it did.”

Norwich manager Daniel Farke, speaking to BT Sport: “It was a pretty close game. Small details made the difference today.
“I think 2-2 at half time was the right result. Then Chelsea were dominating in the first 15 minutes of the second half and that gave them the edge.
“Sometimes when you play against a team like Chelsea, you have to ride that pressure out.
“I am pretty happy with the performance, we had a number of chances, unfortunately we could not find the equaliser.”

Following a trip to Crawley in the EFL Cup on Tuesday (19:45 BST), Norwich travel to West Ham on Saturday (15:00 BST) while Chelsea host Sheffield United at the same time.
Home TeamNorwichAway TeamChelsea