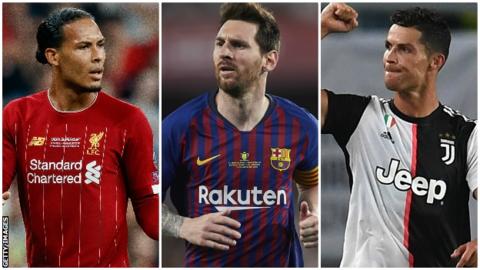 Van Dijk, Messi, Ronaldo: Can the Dutch defender do what Luka Modric did a year ago and beat the game’s two superstars to the award?

Uefa will name its Men’s Player of the Year on Thursday with Liverpool defender Virgil van Dijk up against Juventus forward Cristiano Ronaldo and Barcelona’s Lionel Messi for the award.
Last year, Luka Modric ended Ronaldo and Messi’s dominance of the award – and Van Dijk will be hopeful of leaving the duo empty-handed again after a stellar season with the Reds.
Just how good have the three contenders been over the past year? BBC Sport, with the help of sports analysts Opta, takes a look.

Familiar foes Messi and Ronaldo up once again

It is a battle as old as time itself – or so it can feel.
When it comes to the shortlists for best player trophies – whether in Europe or the world – Messi and Ronaldo have been on them for the best part of the decade.
Since the inception of the Uefa Men’s Player of the Year award in 2011, Ronaldo has won it three times (2014, 2016, 2017), while Messi has won it twice (2011 and 2015).
The pair are in the running once again after phenomenal seasons. Ronaldo helped Juventus win Serie A while Messi led Barcelona to the La Liga title.
But how does their form over the past year compare?
Between 31 July 2018 and 31 July 2019, Messi was by far the deadlier finisher for club and country. During that 12-month period he scored 54 goals to Ronaldo’s 31 and boasted a goals-per-minute ratio of 86 minutes, compared to 127 for his Portuguese rival.
Messi also did much better than he would be expected to do with the opportunities that came his way, scoring just under 15 more goals than his expected goals tally (35.62) for Barcelona. Ronaldo, meanwhile, scored 28 goals, pretty much on par with his expected goals total (28.3).
Widening out the comparison to the rest of Europe, Messi outscored all his rivals – his closest challenger, Bayern Munich striker Robert Lewandowski, scored 11 goals fewer than the Argentina international with 40.
Ronaldo, meanwhile, was outscored by eight players in Europe’s top five leagues while his total of 21 league goals was bettered by three players in Serie A.

You shall not pass

Van Dijk has been a revelation for Liverpool since joining from Southampton and was an integral part of the side that won the Champions League last season and pushed eventual Premier League champions Manchester City all the way.
A defender has never won the award before so for the Dutch international to be in the running against Messi and Ronaldo is already a big achievement.
But can he be crowned Europe’s best player? Let’s take a look at his statistics from 2018-19.
Van Dijk made a total of 59 appearances for club and country last season, scoring nine goals and providing four assists. He also played more minutes for Liverpool (4,465) than any other outfield player. In all competitions, meanwhile, he won over 70% of his duels and aerial battles, underlining his importance at the heart of the defence.
Liverpool conceded fewer goals (22) than any other Premier League side last season and Van Dijk was key to that as he won 76.3% of his duels in the league.
Compare that to other defenders in Europe’s top five leagues and, of the 293 defenders to be involved in 200 or more duels in 2018-19, no player won a higher percentage than Van Dijk.
It was only to be expected that Liverpool boss Jurgen Klopp would be singing his defender’s praises after the Reds brushed aside Premier League rivals Arsenal 3-1 on Saturday, but the former Borussia Dortmund boss feels it is the right time for a defender to be recognised as Europe’s best.
“Modern football should be a bit more open for these things,” he said.
“We don’t have to talk just about Lionel Messi and Cristiano Ronaldo. If we talk about last season, Virgil deserves it; if we talk about lifetime career then Messi and Ronaldo fight for it.
“It is good for kids to see you can be a superstar even if you only defend.”
Facebook
Twitter
Pinterest
WhatsApp
Previous articleRugby World Cup: Wales make 14 changes for Ireland warm-up
Next articleAdekunle Gold: Drop new Music, So breezy in here, you gonna get a Ghana high🤪!! That’s how I live my life. Aye!