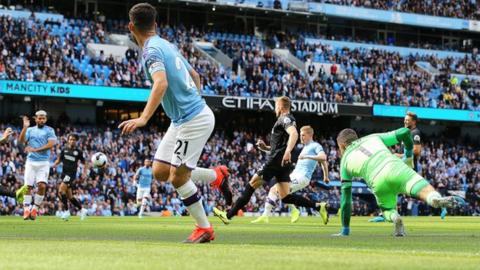 Manchester City have scored eight goals in their last two league games against Brighton
Sergio Aguero was labelled a “special talent” by Manchester City boss Pep Guardiola after the Argentine hit two goals against Brighton, continuing his record of scoring in all four of his team’s Premier League games this season.
Aguero, who has scored with each of his last seven shots on target in the top-flight, also provided the assist for substitute Bernardo Silva to score as the champions eased to victory.
“Of course we need his goals, everybody knows it. But even the days he doesn’t score, with the commitment – he is like this from day one so I’m happy for him,” said Guardiola after the long-serving Argentine, who has been at the club since 2011, took his tally for the season to six.
ADVERTISEMENT
“He is a special talent who I love from day one. We change many things, but from day one I am delighted about his commitment.”
Kevin de Bruyne had opened the scoring from close range with the Premier League’s quickest goal of the season just 68 seconds after kick-off, before Aguero finished off a free-flowing move to double the lead.
He made it 3-0 with a sumptuous finish from the edge of the penalty area following half-time, then Silva completed the scoring with his second touch after replacing David Silva.
However, City lost French defender Aymeric Laporte to injury. The former Athletic Bilbao player was carried off on a stretcher after a collision with Adam Webster and was taken to hospital.

City have scored 14 goals in their first four matches of this campaign.
Having hit five against West Ham on the opening weekend of the season, they scored two against Tottenham and put three past Bournemouth before notching another four against Brighton.
If they carry on scoring at this rate, averaging 3.5 goals per game throughout the season, they will end up with 133 top-flight goals.
At the age of 31, Aguero continues to show the same desire and hunger as when he first joined eight years ago from Atletico Madrid for £38m.
Despite the score, this was not vintage City but Aguero’s man-of-the-match contribution inspired his team as he took his tally to 237 goals for the club. Fitness permitting, he will be past 250 by Christmas.

Aguero has an incredible talent – Guardiola

Laporte injury a worry for Guardiola

Despite his side’s routine win, Pep Guardiola will be concerned at the loss of Laporte – particularly as central defence is not an area of strength for City.
Laporte cut across Webster, who was making his Premier League debut, as he tried to stop Brighton player surging forward.
He went down heavily and there was a delay while the player received treatment on the pitch before being taken to hospital to have the injury assessed.

Laporte was taken off on a stretcher after suffering an injury

“It doesn’t look good,” admitted Guardiola afterwards.
The City boss, who opted not to replace defender Vincent Kompany after the Belgian left in the summer, sent on Fernandinho to operate alongside Nicolas Otamendi, with John Stones injured.
Although Brazilian Fernandinho is more than capable of doing the job, the loss of Laporte for any length of time could cause Guardiola problems.

A visit to City, who clinched the title at the Amex Stadium on the final day of last season, was pretty much a free-hit for Brighton who will target maximum points in their next two games against Burnley and Newcastle.
Having suffered nine defeats in 12 games against the teams that finished in the top six last season, few gave them a chance to avoid defeat – although Crystal Palace’s surprise win at the Etihad last December was not lost on Graham Potter.
“We need a bit of luck, to play well and hope they have a bad day,” said the Brighton boss before the game.
His side’s plan to frustrate and hit the champions on the break did not last two minutes as De Bruyne struck early, yet Brighton did create chances.
Ederson’s save from Leandro Trossard at the end of the first half was a big moment, while the Belgian spurned another chance after half-time as Brighton tried to get back in the game.
Having taken four points from the first two games, they have lost two back-to-back league matches and will target a quick return to winning ways after the international break.

Sergio Aguero produced another masterclass in the art of scoring, with two goals in the space of 13 minutes either side of half-time before setting up Bernardo Silva

‘Brighton played with courage’ – what they said

Manchester City boss Pep Guardiola: “The game was tough. The result was 4-0 but the performance not because they did really well.
“Few teams come here to play with this courage. The difference? My players up front are incredibly good and they make the difference.”
Brighton boss Graham Potter: “The score is not what we like, of course, but in terms of the players’ effort and their courage, trying to do what we asked them to do, it was a top performance.
“Obviously it doesn’t help when you go a goal down so early, but their courage throughout the first half especially, against a top team, was incredible.”

Both teams have a two-week recess due to the first international break of the season, but Norwich City await Manchester City at Carrow Road on 14 September (17:30 BST) – the same day Brighton host Burnley (15:00 BST).
Home TeamMan CityAway TeamBrighton

Read more on US Open last 16: Konta trails Pliskova by set and break