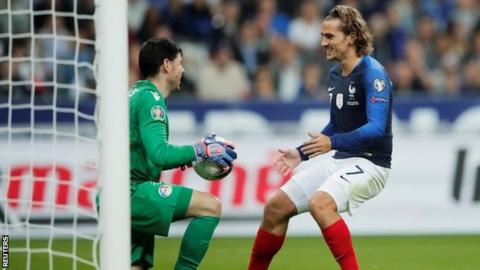 Antoine Griezmann missed his second penalty in four days but France still beat Andorra in Euro 2020 qualifying.
Kingsley Coman rounded goalkeeper Josep Gomes to give Les Bleus the lead, but Gomes then denied Griezmann from the spot.
Griezmann crossed for Barcelona team-mate Clement Lenglet to head home his first international goal.
And Wissam Ben Yedder added a late third from a rebound after Gomes saved Nabil Fekir’s effort.
Griezmann hit the crossbar with a spot-kick in the 4-1 win over Albania on Saturday.
Andorra have lost every single one of the 56 European Championship qualifiers they have played in.
France slip to second place in Group H despite their win, with Turkey beating Moldova 4-0 to go top by virtue of their head-to-head record against the world champions.
Iceland are three points behind the pair after losing 4-2 in Albania, who are six points below the two automatic spots.
Home TeamFranceAway TeamAndorra

7 Things Every Corps Member Should Do During NYSC Service Year