Today, the Pepper Dem Housemates were Tasked to leave their marks in the House by painting their unique graffiti on the walls.
Trust us to capture the magic fingers and well, the others…
Those That Shouldn’t Answer The Calling
For sure, Mercy, Diane and Frodd should try delving into another career; anything but drawing or painting. When they picked up their brushes and aprons with the confidence of Leonardo Da Vinci, one could have been easily fooled. In a matter of seconds, they were done with their painting and that was when we knew Biggie’s walls were in trouble.
While some wrote a whole novel, others kept it short and simple but not simple enough for us to see why painting isn’t their calling.
Think we’re exaggerating? 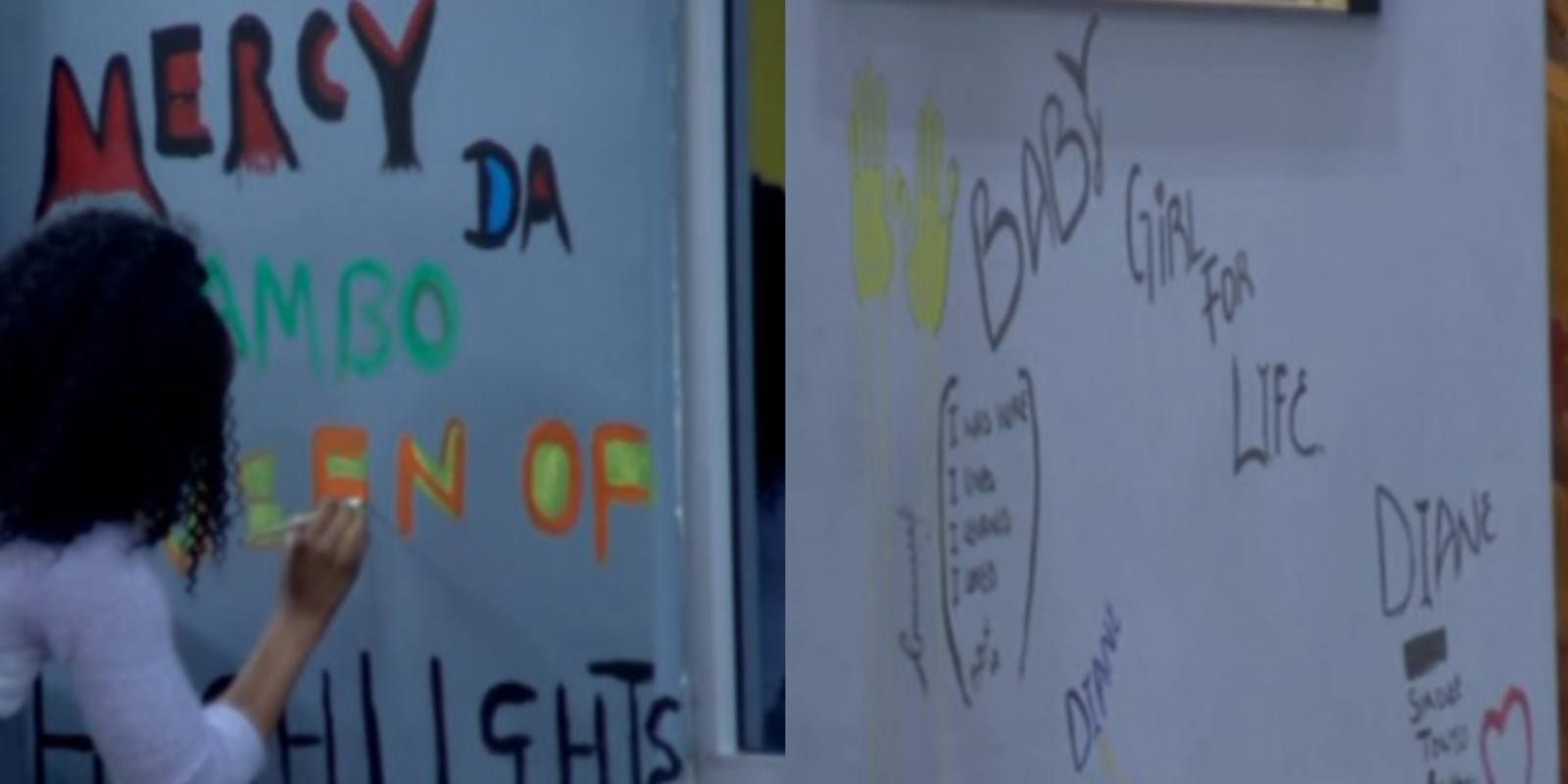 Sell Yourself!
For Cindy, Mike and Seyi, this Task gave them an opportunity to plug their business platforms and personal brands. While Cindy painted her music brand on Biggie’s walls, Seyi gave us an insight into his political ambition and Mike put Aireyys in our faces so we wouldn’t miss it, even if we tried to – from the television unit to the Eviction doors, Mike sold his brand. 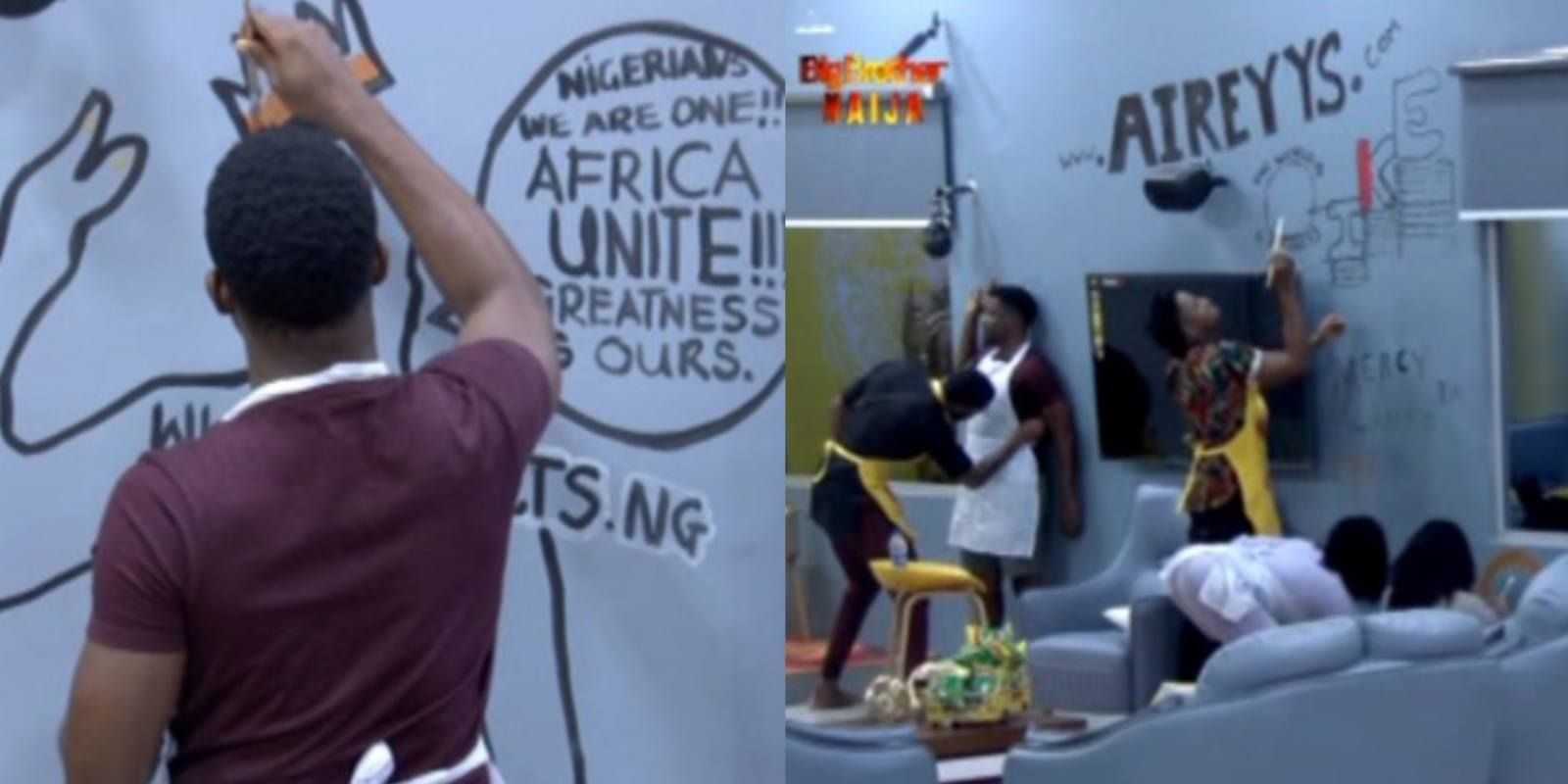 The Magic Fingers
Ike, Omashola, Tacha and Elozonam kept their drawing skills away from us and we couldn’t stay mad at them for long. From Omashola’s caricature to Tacha’s painting of herself and Ike’s unique graffiti, we definitely should be getting some painting lessons from these Housemates. We found it cute that Omashola drew the faces of the Pepper Dem last ten standing.

The Cruisetopia Pledge
Where two or more members of team Enigma are gathered, others will follow suit. This was evident in the painting Task today as we had Diane, Mercy, Elozonam, Seyi, Mike, Cindy and Ike concentrating their painting on the same side of the wall. Team goals?

We wonder what other secret talents the Housemates are hiding from us. In the meantime, we sure love how well the Pepper Dem Gang have been able to bond in between Tasks and punishments.
Cindy, Elozonam, Ike, Mike and Tacha are up for Eviction. Vote for your favourite Housemate here, via the MyDStv App, via the MyGOtv App or via SMS. Voting closes on Thursday 12 September at 21:00 WAT. Big Brother Naija is proudly sponsored by Bet9ja, and is available on all DStv packages, and on GOtv Max and GOtv Plus. For more information on Big Brother Pepper Dem follow us on YouTube, Instagram, Twitter and Facebook.
Facebook
Twitter
Pinterest
WhatsApp
Previous article65 fake graduates handed over to the police by NYSC
Next articleMan Utd: Ed Woodward says ‘everyone’ at club working on revival