Bbnaija: A MegaGrowth Experience With Jenifa

Ding Dong, The Housemates go to the door and who did they find?
Courtesy of MegaGrowth, Gbo Gbo Bigs Girl, Funke Akindelo Bello popularly known as Jenifa paid the Pepper Dem Gang a visit and it was an eye-opening experience for the Housemates.
Knock Knock
In this case, it was the bell that rang and made the Housemates wonder who might be paying them a visit. Their curiosity was soon satisfied as the celebrity guest made her way into the House. From Diane’s hug to Seyi’s expression, the reactions from the Housemate were indeed rich as they didn’t expect to see Jenifa in the House. Even Mike who isn’t very familiar with the guest got the feeling that she was important and he prepared himself to enjoy the experience. 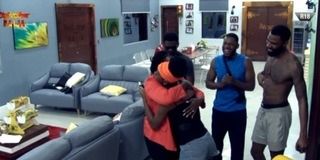 Let’s Talk A Little
Switching from Queen’s English to Jenifa lingo, Funke Akindele Bello had a chat with the Housemates and it was amusing.
Once they got seated, the guest kicked off the conversation by talking about her passion for the youths and how she believes they are the leaders of today. She then passed the baton to the Housemates and they proceeded to talk about themselves and their various hustle. One by one, they revealed what they were passionate about and what they planned to do after the Big Brother Naija House.
When Diane revealed her passion for acting, she was rewarded with a statement from Funke Akindele Bello “I can’t wait for you to join Jenifa’s Diary.” This comment was greeted with excitement from Diane.
Tacha on her part chatted about her business and her love for making money. She ended her conversation with a shot at Frodd  “you owe me 50 Bet9ja Coins for using my term, serial entrepreneur.” 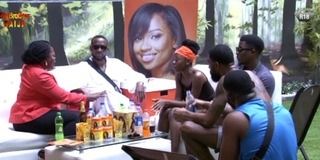 Bearing Gifts
The guest didn’t come empty-handed as she gifted the Housemates products from MegaGrowth. According to her, they are in showbiz and they always need to represent. If the Housemates don’t look good, who will?
Concluding her visit, she advised the Pepper Dem Gang to remain positive, hold their heads high and remember that the sky is big for everyone to fly. 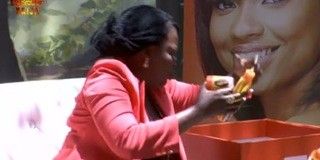