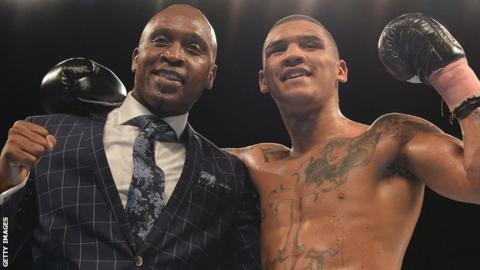 Two of Nigel Benn’s sons, Conor 22, (above) and 23-year-old Harley are both professional boxers like their father
Nigel Benn has been described as the “fittest 55-year-old on planet Earth” as he prepares for a shock ring return.
The ex-world champion has not fought professionally since November 1996 but will resume his career on 23 November, according to his promoter Mark Peters.
“I wouldn’t support Nigel if I didn’t believe he was fit to box,” he added.
The British Boxing Board of Control (BBBoc) is against the fight, which will be sanctioned by the rival British and Irish Boxing Authority (Biba).
Benn – whose last fight was a defeat by Irishman Steve Collins 23 years ago – has passed all Biba’s medical tests, while there will be a specialist in head trauma and a portable brain scanner available at ringside on fight night.
Former world champion Sakio Bika, 40, has been tipped to be his opponent.

Benn seeks closure after years out of the ring

Peters, his promoter and long-time friend, told BBC Sport the story should be seen as a a positive one, and that even at 55, London-born Benn is still in a condition that most men half his age would envy.
“It’s not like Nigel left the sport, hung up his gloves and never trained again,” he said. “He must be the fittest 55-year-old on planet Earth.
“He has still been training twice a day and he will shadow box anywhere.
“I wouldn’t support Nigel if I didn’t believe he was fit to box. Nor he is doing this for financial reasons. He is far from skint – in fact, he has just built a massive 10-bedroom property for himself in Australia, where he lives.
“It’s his life and his prerogative to fight.
“From his point of view, this is closure for him.”
Benn was part of a golden generation in the super-middleweight division in the 1990s, his all-action style leading to big fights with the likes of Collins and Chris Eubank.
There were attempts to arrange a fight with both of those two on this occasion, while an approach was also made to American Roy Jones Jr.
Instead, Benn is expected to face Cameroon-born Bika, who lost on points to the unbeaten Welsh former world champion Joe Calzaghe in 2006, and whose last fight was in 2017.

Benn fought Chris Eubank in 1990 and 1993, losing the first contest at Birmingham’s NEC and drawing the second at Old Trafford football ground

‘It is not in the best interests for the sport’

Biba – a rival to the BBBoC launched in 2016 – said it was happy to licence the fight, despite Benn’s age.
There will also be stringent medical protocols as Biba introduced portable scanners to ringside at all of their sanctioned fights in March 2017.
“Nigel Benn is in amazing condition,” said Biba vice-president Gianluca di Caro. “He is a magnificent athlete. He is not taking any chances and he is minimising risk.
“All the boxes are ticked for us. There will be increased medical supervision and everything will be in place.”
No formal application was made to the BBBofC – the governing body for the sport in the UK – despite the fight taking place on British soil.
“Nigel Benn has not boxed for a long, long time,” said Robert Smith, the general secretary of the BBBofC.
“We have not had a formal application for a licence from him but we had a conversation in the summer and we advised him that he was very, very unlikely to get one.
“It is not in the best interests for him, or for the sport.”
Two of Benn’s most famous fights at the height of his career came against Michael Watson in 1991 and American Gerald McClellan four years later, with Watson and McClellan both suffering life-changing injuries.
Injuries in the sport continue to cause controversy, with trainer Robert McCracken’s comments about British heavyweight Anthony Joshua regarding concussion in his defeat by Andy Ruiz Jr, recently making headlines.
Brain injury charity, Headway, is uneasy about the idea of a 55-year-old boxing competitively.
“Boxing at any age is an inherently dangerous sport,” said chief executive Peter McCabe.
“We know that every blow to the head delivered by a boxer has the potential to cause serious and long-term brain injury or even death.”
Facebook
Twitter
Pinterest
WhatsApp
Previous articleRugby World Cup 2019: ‘Officiating not good enough’ – World Rugby
Next articleBest Fifa Football Awards 2019: Lionel Messi wins best men’s player of the year