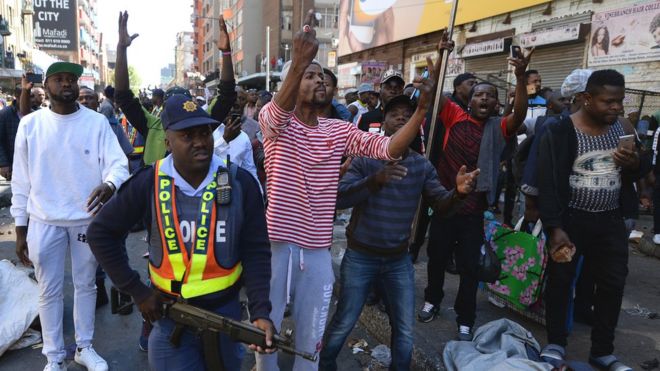 Image copyrightGETTY IMAGESImage captionPolice have struggled to contain the crowds of rioters who have looted shops and torched vehicles
South Africa’s President Cyril Ramaphosa has condemned a wave of looting and violence mostly targeting nationals of other African countries.
“There can be no justification for any South African to attack people from other countries,” he said on Tuesday.
Dozens of people were arrested in Johannesburg on Monday. At least five people have been killed in the unrest.
Other African governments have issued warnings to their citizens over the violence.
Attacks on businesses run by “foreign nationals is something totally unacceptable, something that we cannot allow to happen in South Africa,” Mr Ramaphosa said in a video posted to Twitter.
“I want it to stop immediately,” he added. 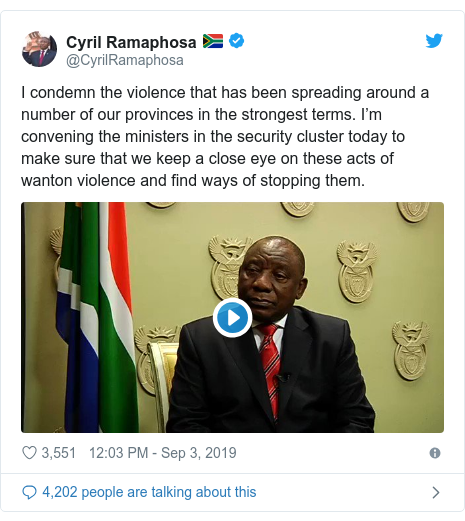 Separately, the African Union (AU) issued a statement condemning the “despicable acts” of violence “in the strongest terms”.
Police fired tear gas, rubber bullets and stun grenades in an attempt to quell the unrest on Monday. The surge in violence also saw mobs loot shops, torch vehicles, and target lorries that were being driven by foreign nationals.
Violence continued on Tuesday in Johannesburg’s Alexandra township.
Some angry residents in the city are calling on the government to deport undocumented migrants, the BBC’s Nomsa Maseko says.
But one Nigerian businessman, whose shop was targeted by looters, told the BBC that foreign nationals in South Africa were subjected to “a lot of allegations [and] lies”.
“This is not a criminal attack. This is a [xenophobic] attack,” he said.
A branch of the South African supermarket Shoprite has been vandalised in the Lagos neighbourhood of Lekki, an eyewitness has told the BBC.
One eyewitness reported seeing two bodies lying on the road outside the shopping centre where the supermarket is based.
Cars stuck in nearby traffic were also vandalised as their passengers fled. The authorities have not confirmed the reports of casualties.

What has the reaction been?

Nigerian President Muhammadu Buhari sent an envoy to South Africa on Tuesday to “express Nigeria’s displeasure over the treatment of her citizens”.
In a statement, the country’s high commission in South Africa described the situation as “anarchy”. The government alleges that Nigerian-owned businesses were targeted in Johannesburg and it has called on Nigerians to come forward to report what has happened to them.
Ethiopia’s embassy in South Africa has advised its citizens to close their businesses during the ongoing tension, according to Ethiopia’s state-linked Fana Broadcasting Corporate (FBC).
It also says that Ethiopians are advised to “distance themselves from any confrontation and conflict” and not go out wearing expensive jewellery. 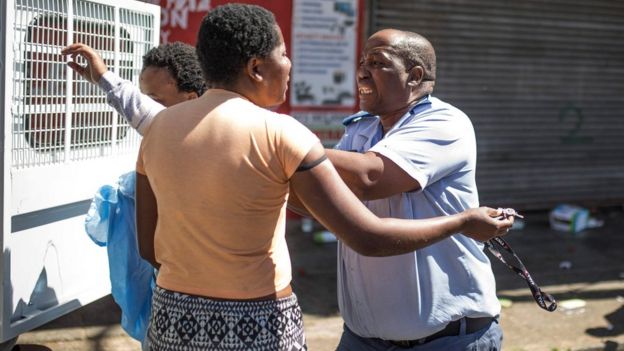 Image copyrightAFPImage captionIn some places, police have confronted those trying to loot

Meanwhile, Zambia’s transport ministry has said that lorry drivers should “avoid travelling to South Africa until the security situation improves”.
The statement refers to reported attacks on foreign lorry drivers. The South African IOL news site says that there have been “numerous incidents” of vehicles being looted.
But South Africa’s police minister, Bheki Cele, said on Monday that “criminality rather than xenophobia” was to blame for the “senseless violence”.
“[Xenophobia] is used as an excuse,” he told reporters after visiting Johannesburg’s Central Business District, where much of the unrest has been taking place. “Nothing… has sparked any form of conflict between the South Africans and foreign nationals.”
This isn’t the first time the country has been rocked by anti-foreigner violence.
In 2015 xenophobic attacks became so bad that a sports field south of Durban was made into a makeshift refugee camp for Africans escaping the violent looters:

Media captionIn 2015, Milton Nkosi reported on the deaths of several people during attacks on migrants in South Africa